Neither grape nor grain — but craft, indeed

"The science behind fermentation allows any fruit wine to be fermented to dryness." 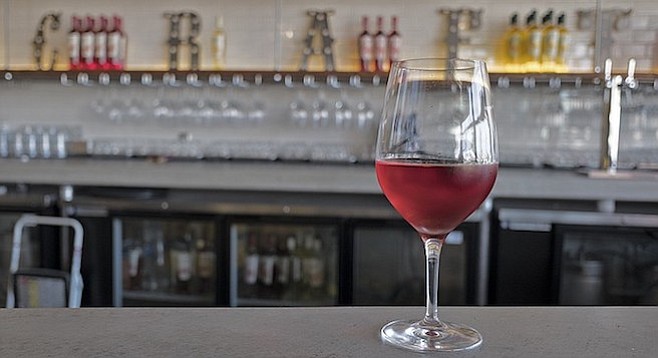 A different sort of craft-beverage company has landed in Hillcrest, just in time for the summer heat. Fruitcraft Fermentery and Distillery (1477 University Ave San Diego, CA 92103) grand-opened the sweltering last weekend of June, serving alcoholic drinks produced not from grain, grapes, apples, or even honey, but from a full spectrum of acidic fruits including pineapple, pomegranate, and mango.

The Fruitcraft name constitutes a rebrand for the North County business previously known as California Fruit Wine, founded by brothers Alan and Brian Haghighi eight years ago in their home town of Vista.

"We were inspired by the creativity we saw in the craft-beer scene," says Brian, who notes the decision to rebrand arose from the confusion the fruit-wine name sometimes causes with distributors and retailers. Despite fruit wines being among the earliest fermented beverages, in the American drink market, he says, "We don't fit in any clear category."

According to Alan, that's only because no one has taken the effort to pursue the craft of it. "Fruit wine has historically gotten a bad reputation," he says, "because across the country it's usually more mom-and-pop, small operations doing it — but they're not doing it justice." He described cloying, syrupy concoctions, where rushed fermentation practices leave behind too many residual sugars to produce something refreshing, producing something more akin to dessert wine instead. However, he maintains, "The science behind fermentation allows any fruit wine to be fermented to dryness."

That's the process he's been fine-tuning the past eight years, developing a long, cold fermentation that lets the yeast consume most of the fermentable sugars, leaving behind a chilled beverage similar in character to a white wine or rosé but expressing each individual fruit's natural aromatics, rather than grape varietals.

The Haghighi brothers have also had the opportunity to explore which kinds of fruit produce the best results. "The ones with good acid structure," Alan says, citing blackberries, raspberries, apricots, and plums. "They have good acid bite that give it a refreshing quality. Cranberries have always made phenomenal wines for us." Low acid, high sugar fruits such as persimmons and dates have been less successful, but as the new Fruitcraft location readied to open, Alan was finishing a sparkling grapefruit wine.

The Hillcrest storefront was previously home to Vinavanti urban winery. Vinavanti winemaker Eric van Drunen joined Fruitcraft as a shareholder and moved his natural process winery to Miramar, where he also recently rebranded, as Charlie & Echo.

Since Fruitcraft inherited Vinavanti's kitchen, the Haghighi brothers found themselves in a position, legally, to add distilled spirits to their offerings. They've started pursuing a craft spirits license of their own, but in the meantime they're contract distilling with Casey Miles at San Marcos' California Spirits Company to produce a line of eau de vies, also known as fruit brandies.

For Alan, it seems more intuitive using fruit to produce alcoholic refreshment than more common fermentables such as grains, rice, or potatoes. But he also enjoys the creative opportunity. "For someone who gets as bored as I do," he says, "it's just so much fun to constantly have a new color you can paint with."

Is San Diego a Creative City?

Does San Diego think differently and do cool things? We asked a handful of local insiders